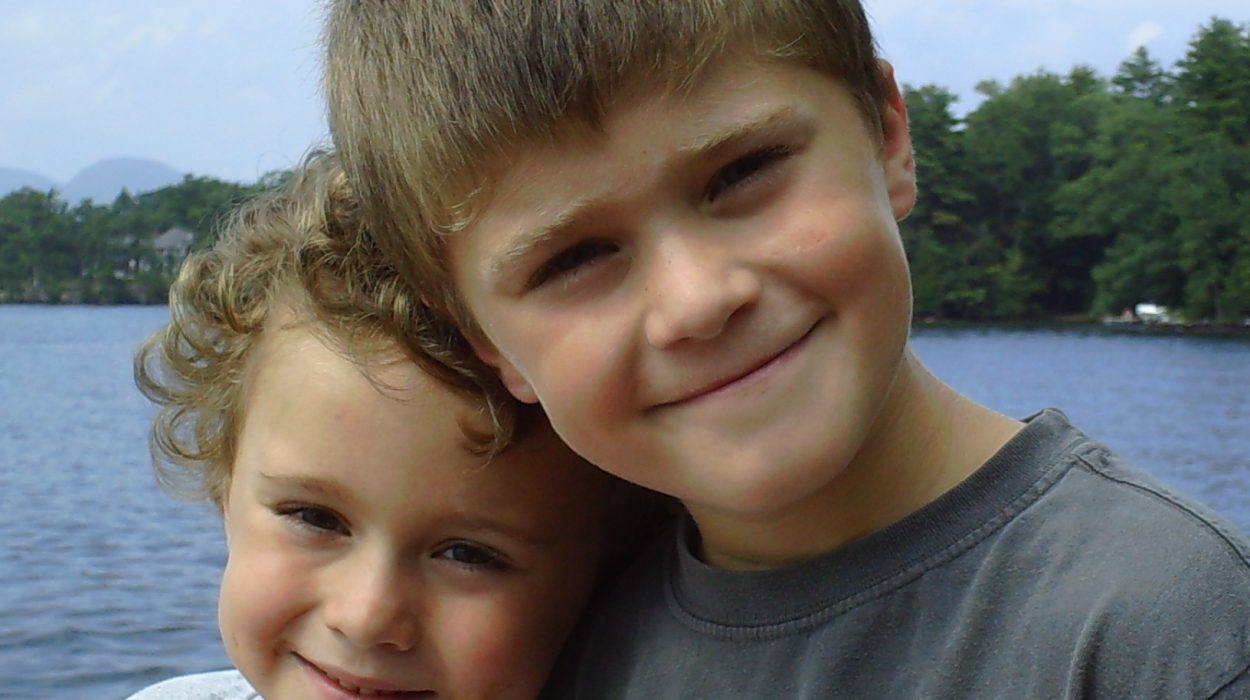 The doctor would have to cut a door to coax him out
Sure knew how to make an entrance, though
(I am child, hear me roar!)

And as he grew, we would see him
emerge slowly from the mist of infancy
like a coyote cautiously lurking, peeking, sniffing the air
And over time he would become bold
kinetic and unwieldy

He’d cry
He’d scream
He’d throw his food
(Oh, the armies we could feed
from dropped zwiebacks and peas!)

We would propitiate with Popsicles,
make offerings of Oreos,
and placate with playthings
hoping our divine bull wouldn’t trample the city

But he did.
(And to think that
there was once a time
I did not want
to have a child)

So, this is it. This is the big revenge: you raise a child, experience all the trials and challenges and pain and heartache of their growing, watch them go off into the world and get married – and then you laugh at them when they have children of their own. The circle is complete.

“Dad, I don’t suppose you could help me here,” I said, “I’ve got poop on my arm and I can’t reach the wet wipes.”
“You’re doing a fine job all by yourself,” he chortled.

I think he thought he was being funny.  But he hadn’t ever changed a diaper before, so what gave him the right to be so smug?  And then I thought about all the heartache and grief my dad and my mom had endured during my tenure in their household.  All the panic and stress.  Okay, so maybe he had some right.

As I changed my newborn son’s diaper, I remembered my initial uncertainty about having kids.  I hadn’t been able to understand why anyone would want to spawn.  Our bodies are obviously engineered for the mechanics of it.  Just insert tab “A” into slot “B” and from there, nature takes over.  But just because the body is capable of doing something doesn’t mean that it is desirable or necessary to do it.  I wanted to believe that there is a reason to procreate other than tax breaks and the continuation of the species.

Before my wife became pregnant with our son, Ty, I asked her why she wanted to have a child.  She didn’t have to answer, of course.  It was clear: she wanted to have a baby because that was what her body is made for.  I believe she used the phrase “biological imperative.”  Before I could imagine all the things I could get away with using those same words, she turned the question on me:  Why do you want to have a child?

I didn’t have a ready answer and I knew that my momentary hesitation would not sit well with her.  It was a loaded question anyway.  I think I said something innocuous like, “Because I want to have a family with you.”  One of those statements intended to pacify but not commit.  I needed more time to think.  Did I want one at all?  Babies are messy, unpredictable, loud, fragile, dependent and high maintenance – all the things that have driven me away from past relationships.

Once I had asked my dad why he and Mom wanted to have kids.  But something must be wrong with the part of my brain that deals with the answers to this question, because I can’t remember what he said.  Any of the following statements could have been his response:  Because I wanted to have a family with your mother.  Because that is what our bodies are made for.  You’ll have to ask your mother, son – it was so long ago… As I remembered thinking that there might be no meaningful answer to the question, I caught a stream of warm pee across my cheek.

“Oh, good god!  Quick, get me a towel!”
More chortling from Dad as my wife came into the room.
“What happened?” she asked.  And then she started laughing hysterically.
“Funny.”  I said.  “Very funny.”

“Oh, just you wait.”  My dad said with a wink.  Somewhere in the hidden genetic pipeline of my brain, I saw a future vision of me saying the same thing to my son.

As time went on, I had refused to lose the trail of my elusive prey.  I continued to ask friends, colleagues, neighbors, relatives.  Why did they want to have kids?  I collected lists of equally nebulous responses.  To have someone to take of us when we’re older.  We’ve just always wanted kids.  Because babies are just so cute.   I began to feel like I was in the Twilight Zone.  No one could give a real answer.

One thing was clear: the kid, in and of itself, was never the reason.  No one said, I want a child for the sake of the child – or I would like a kid because I want to create a unique consciousness that will become aware of its own existence and through self-reflection and meditation contribute to the betterment of life for all human beings.  I was quite sure that the children themselves were the last reason people wanted to have kids.

Sex is a different thing.  There is at least a return on the investment, a tangible moment of gratification.  To me sex had always been the end, not a means.  One had sex to have sex, not make babies.  Yes, that is what our bodies are made for.

In my darkest hours, I could see children as nothing more than tools, things to bring about a desired state.  At best, they can temporarily prevent some broken relationships from breaking completely.  They can get you more food stamps.  They can get you sympathy.  I suppose they can even give you a few hours of amusement here and there.  But they also give you an eternity of inconsolable, drooling, late night cry-a-thons.  Then there are the tantrums.  And then they become teenagers and that makes all the other stuff look like the Golden Age.

I felt stuck.  I was young and foolish and frankly just wanted sex, not babies.  I wasn’t ruling babies out, but before I created another human being, I wanted to be damned sure that there was a reason.  A good reason.

However, my wife didn’t just have a biological clock.  She had a time bomb with only seconds remaining.  The pressure was on.  I had dreams of her screaming, I want a kid right now! while feverishly tying my arms to the bed posts.  After she told me that she was going off the pill, I knew the gig was up.  I had to speak or forever hold my peace.  What feeble words could I eek out that would be argument enough against the logic of her biological imperative?  I was screwed.  Both metaphorically and physically.

It wasn’t until Ty was born that the veil was lifted.  I finally understood.  The third time the doctor had come in to check on my wife, he called the shot to prep her for a C-section.  I was given scrubs and ushered into the operating room as she was wheeled in on a gurney.   I watched as the doctor cut into her stomach, and pulled out our son.  Like Michaelangelo carving David from marble, he produced a thing of wonder where only raw materials had once gathered.

And there was more.  I had new eyes through which to see my wife.  She was no longer the girl I had met back in the days of my youth.  She was now glowing, now complete – a chrysalis transformed.  And I too had changed.  Not only had our son been born, but in inexplicable ways, we all had.  And no matter how unpredictable, cluttered, or frenetic our life has become – no matter how many diaper mishaps, tantrums, and other misadventures we’ve had thus far – the baptism of birth has left its indelible mark on us.

I had once thought that a child was the problem lacking a solution, but in a sudden quantum movement forward, I discovered that my child is the answer to questions I had not known how to ask. My child completes me, provides gravity and giggles in equal measure, teaches me who I am capable of becoming. Like a catalyst, some mythic Trickster, he enters the scene, turns everything upside down and without malice, creates new understanding where there was once a void.

So now, nine years later, I have two sons.  And even as I write these words, the boys are roaring for me to come downstairs and play with them.  For now, I immerse myself in the steady flow of joyful moments that courses through our time together.  But I suspect that some day I will chortle at my boys when they become fathers, as my father did to me.  And I suspect that I too will have some right to do so.