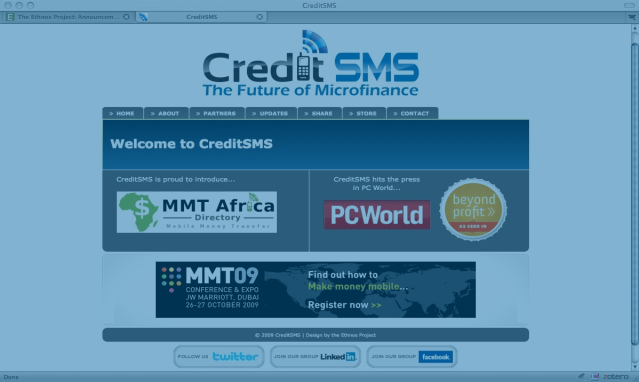 Start-Up Aims To Facilitate Loans With a Global Reach

After graduating from college in May, Benjamin Lyon came to the District to delve into the mobile currency industry that has sprouted in poor, rural communities in the Philippines and Kenya.

Upon arriving, Lyon, 22, along with Scott England and Mark Oppenneer, founded a start-up company called CreditSMS. It develops software for microfinanciers to deliver and track loans to people in poor, rural communities via text messages.

“We’re looking at a global project for microfinanciers,” Lyon said. “We’re getting there.”

They didn’t have much money to start the project. But through an announcement he saw on Twitter, Lyon thought he had found an ideal resource for the needed capital.

As discussions became more in-depth on the Web site, a four-month contest was created in August to award cash prizes for the most creative and practical solutions for sub-Saharan farmers. More than 200 proposals were submitted.

A user profile must be created to submit or endorse an idea. Ideas are ranked by the number of endorsements received, with final rankings announced on the 15th of each month. The top three submissions receive a cash prize.

The endorsements piled up for their proposal, but Lyon and his colleagues fell short.

“We like the endorsements, but we’re looking for other opportunities to fund our operations,” Lyon said after earning a top 10 finish.

“It’s really a place people can come together and build upon each others’ ideas,” said Molly Mattessich, project manager for Africa Rural Connect and a former Peace Corps volunteer in Mali.

In round one, first place was awarded to Zittnet, a rural Nigerian wireless Internet service provider that aims to establish agricultural network centers in villages. The centers would provide access to real-time pricing information for farmers and traders via mobile telephony or the Internet.

Self-Support Ghanaian Subsistent Farmers Consortiums were awarded first place in round two. In that proposal, groups of farmers would gather to share information, techniques and resources to create more profitable opportunities for members.

The final round of winners will be announced Nov. 15. Although money is an incentive, it isn’t the only perk. Lyon said the endorsements from the site have been helpful in creating awareness of a budding industry and providing the incentive to continue developing his company’s product.

“It gave a multifaceted benefit,” said Lyon, a Tenleytown resident. “The development community respects former Peace Corps volunteers. So it gave legitimacy. That validation was enough to keep me focused.”

Although providing financial support and encouraging ideas are part of the network’s goal, Mattessich said the ideas must be implemented in rural communities to ensure their effectiveness.

“We don’t just work in a vacuum. We are driven by working with community members,” she said. “It’s really important for us to get Africans involved with this.”