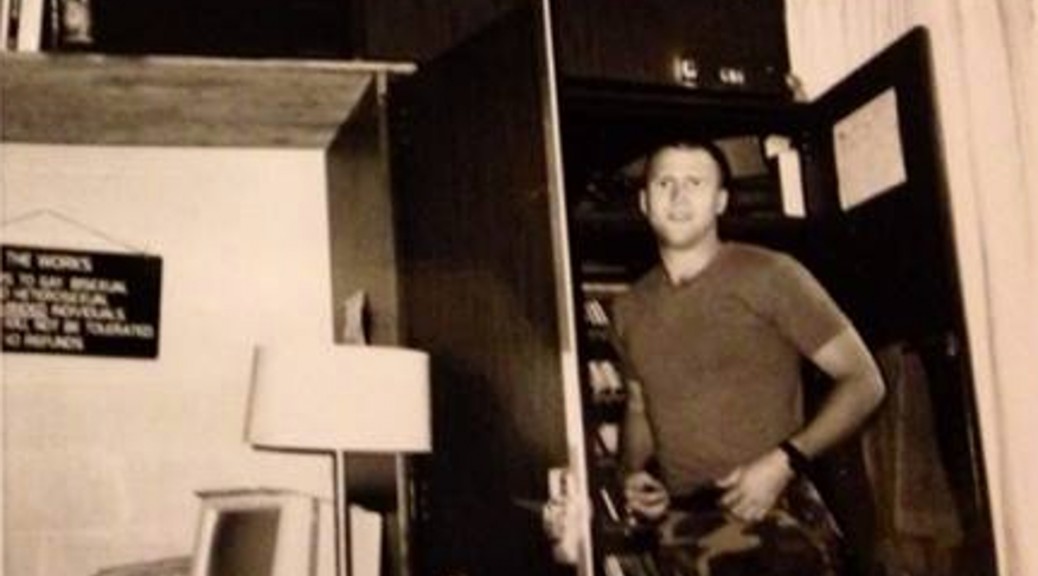 These are some of the things I ate one night off the floor of an old repurposed bowling alley on Camp Humphreys in South Korea. At the time (1991-92), I was stationed at Camp Howze, now defunct, in HHC 1st Battalion, 503rd Infantry Regiment (then part of the 2nd Infantry Division).


I was at Camp Humphreys for training on the Maneuver Control System (MCS), a computer system used for battle planning and assessment that was housed in a standard Army ambulance which could be attached to our Tactical Operations Center (TOC). I looked pretty much like this guy when operating it (without the glasses, of course). 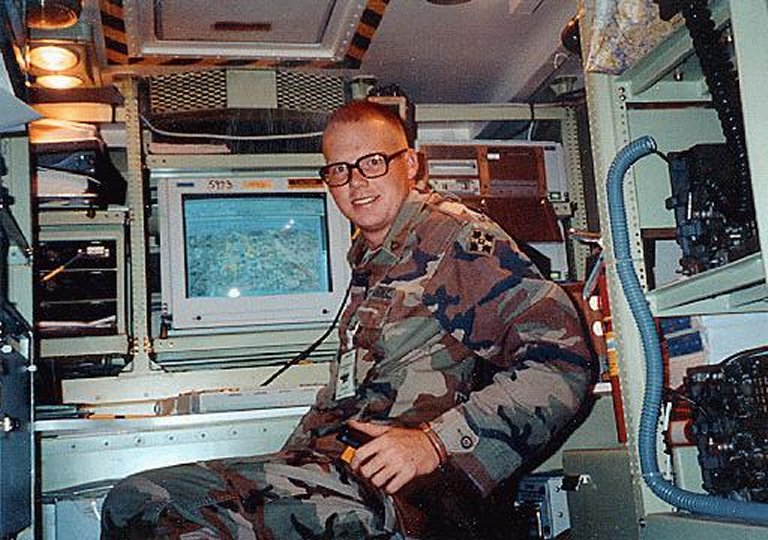 I was dropped off at a building where I was to get my temporary housing situated. My ride drove off and I entered to find the Master Sergeant in charge of billeting. He asked my name and purpose for being there. PFC Oppenneer reporting for MCS training. He looked down his list and said that he couldn’t find me on it and perhaps there was some mistake.

I explained that I was under the impression my unit had coordinated room and board for me and that as there seemed to be some mistake, would I be able to bunk down anywhere at all? Well, he said… there is one place but you’re not going to like it much. I enquired. He said, you could grab a cot in the old bowling alley. That’s fine, I said. I was an infantry soldier – I could sleep anywhere.

Let me know if there are any problems, he said. With the other folks, that is. There was a platoon of Marine Corps soldiers staying there while conducting Stinger training. We’d be there together for several days.

I went to the bowling alley, grabbed a cot and set up along a far wall, far away from where the Marines’ gear was located. Sometime later, they arrived back from training. I went over and introduced myself to the Gunny and offered to pull guard duty along side of his men and chip in with clean up and generally contribute since we were sharing a roof. He was very impressed and said that he’d give a holler if they needed me.

A bit later in the afternoon, one of the guys came over and told me that the LT wanted to see me. Whereas the Gunny was a nice fellow, the LT had a chip on his shoulder and clearly wanted to give me a hard time (the rivalry between the Army and the Marine Corps is long standing). Here’s the thing – military courtesy is just that, a courtesy. I was not beholden to salute or even heed the leadership of the Marine Lieutenant because we were in separate branches of the military. My going over to the Gunny was done out of respect. This guy just wanted to mess with me. He made insults. He made jocular threats. It was all in good fun.

But I wanted to show that I wasn’t the kind of person to buckle under such treatment, so I may have made some smart ass remarks of my own (made in good humor of course, but ones that in hind site it would have been best not to make in front of his troops). As I walked back to my cot, the Gunny came up and told me that I should probably sleep with one eye open that evening. All in good fun.

I was clearly in for a rough ride, so I did what any self-respecting infantryman would do. I went to the NCO club and got ripped. Sometime mid-evening, I stumbled back to my cot, fell in and zonked out. And I as I slept, I began to imagine a chanting sound. Quiet at first, then louder… army dog, army dog, army dog. The chant crescendoed into a war cry and all at once I was surrounded by them, hoisted in my cot and carried to the center of the bowling alley.

Take your clothes off, a voice said in the darkness. I beg your pardon? I said, take your clothes off – to your skivvies – or we’ll do it for you. Hey, I’ve got an idea. Why don’t you go fuck yourself. Possibly the wrong thing to have said, because I was pulled from my cot, and in the midst of drunkenly thrown punches, had my BDUs yanked from my body. I was then tossed back onto the cot and roughly held down while two of their gang taped me to it with 100 mph tape (military grade duct tape). My legs and ankles were taped, my chest was taped, and my mouth was taped.

The head of the cot was lifted so that I was “standing” vertically. A small field table was placed a few feet before me and several flashlights were turned on to illuminate the LT, face painted in camo, seated at the table, reading these words from a notepad…

Private First Class Oppenneer, this temporary court of the United States Marine Corps has found you guilty of the following charges…

As the charges were being read, the soldiers hooted, stomped their feet, and shook the cot. The LT then directed his men to shine their lights in my face as he read the charges again. This time, asking me how I pleaded after reading each one.

Charge #1 – Your hair is too long. How do you plead, soldier?

I remind the reader of the image I posted a few days ago that clearly shows the nature of this trumped up charge. A soldier next to me ripped the tape from my mouth and I slurred, “Not guilty!” at which the entire platoon began covering me in whatever liquid or goo was in their possession. Anything that could be sprayed or squirted from a bottle or food packet was put on my head and smeared down my body. As if to punctuate this madness, two Marines standing near me began to thwack my chest and belly with the suction cup end of toilet plungers which made a sloppy wet sound as the muck made the suction stronger.

The floor around me was covered in a foul pig slop of MRE ingredients as they fell from my body: spaghetti and meatballs, peanut butter, beef stew, cheese spread, ketchup, Tabasco sauce, and dry goods too – instant coffee, hot cocoa powder, and creamer. There was stuff from their dopp kits: toothpaste, shampoo and conditioner, boot polish, and shaving cream. These were all coated with beer and spit as the soldiers yelled and jostled.

When it was time for the final charge, The LT stood and motioned for quiet. Okay. We’ve heard you plead not guilty and we know that you’ve been lying through your teeth this whole time. That’s okay. We can make all this stop right now. All you have to do is admit that you are guilty of the treasonous crime of joining the Army. Just say the words “I should have joined the Marines,” and we’ll let you go on your way and drop everything.

Again, the tape was pulled from my mouth and before I could think, I shouted, “With all due respect your honor, all of you can go to hell! I’m a soldier in the US Army and I’m damn proud of it!” I might as well have yelled, “I’m the antichrist and I eat babies!” the way they reacted. The bowling alley erupted in a violent noise as they shouted and pressed in. I was cut from the tape that held me to the cot and was forced to my knees in the muck. The LT held up his hand again for silence.

Perhaps you misunderstood, boy. I’m telling you that you can stop this thing now before it gets out of hand. Here’s what we’ll do. We’re going to give you a choice. I’m going to put this coin down here on the floor… – he produced a large brass unit coin and placed it in the muck. You can low crawl through this shit pool and push this coin with your nose to where that pole is (motioning a few feet away) or you can eat a mouthful of the shit and be done with it.

The bowling alley was dead silent as I looked at the LT and then looked around at the platoon of Marines. The light from their flashlights was bright in my eyes and all I could see of them was a vague canvass of camouflage and shadows. I slowly cupped my hands together, scooped up a handful of the dark soupy concoction and then smiled really big as I said – no lie, “Only a Marine would eat one mouthful.” And I proceeded to shove it in my mouth and swallow – and as soon as one gulp was done, I shoved in another handful and another. As I did this, at least three of Marines vomited and everyone started shouting and making sounds of disgust. I then got on my belly, put my nose to the coin, and started to low crawl in my underwear toward the pole.

At this point, the LT shut it down. The Gunny pulled me up by the arm and said Shit, son. You’re the toughest mother I’ve seen in a long time. Go on and get yourself cleaned up. He tried to point me toward the head, but I walked over to a broom closet next to it and grabbed a mop. Sorry sergeant, but I seemed to have made a mess on the floor.

And working in my nasty saggy stained skivvies, covered in a slimy patina of god knows what all, I helped the Marines clean up. And then I showered, fell onto the fresh cot someone had set up in my area and fell into a deep satisfying sleep.

The next morning, I heard the platoon’s wake up call and rolled out of my cot, got dressed and was sitting there spit shining my boots when I heard my name called. Oppenneer! Come on over here, son. It was the Gunny. I threw on my boots, laced up, and jogged over to the platoon. Step up here to the front. The LT has something to say to you.

I stood there at parade rest as the LT stepped forward and said, I got to tell you, private. You are one seriously tough son-of-a-bitch, and last night you showed us all what it means to face adversity with courage. We are proud to know you and still think you fucked up by joining the wrong service. We’d be proud to call you a Marine. As a mark of honor and respect, I’d like to induct you as an honorary member of the 1st Low Altitude Air Defense Battalion of the United States Marine Corps. As a symbol of this honor, I am presenting you with the unit challenge coin that you earned last night by showing us that you are a man of true intestinal fortitude.

At this, he held out the large brass coin I had nosed through the muck. I accepted it and said thank you as the platoon clapped and whistled. And that, kids, is a true story. No fibbing. To this day – just over twenty years later – I carry that coin with me. It is the coin that adorns my key chain. And to this day, I consider it one of the highest awards I received while serving in the military.