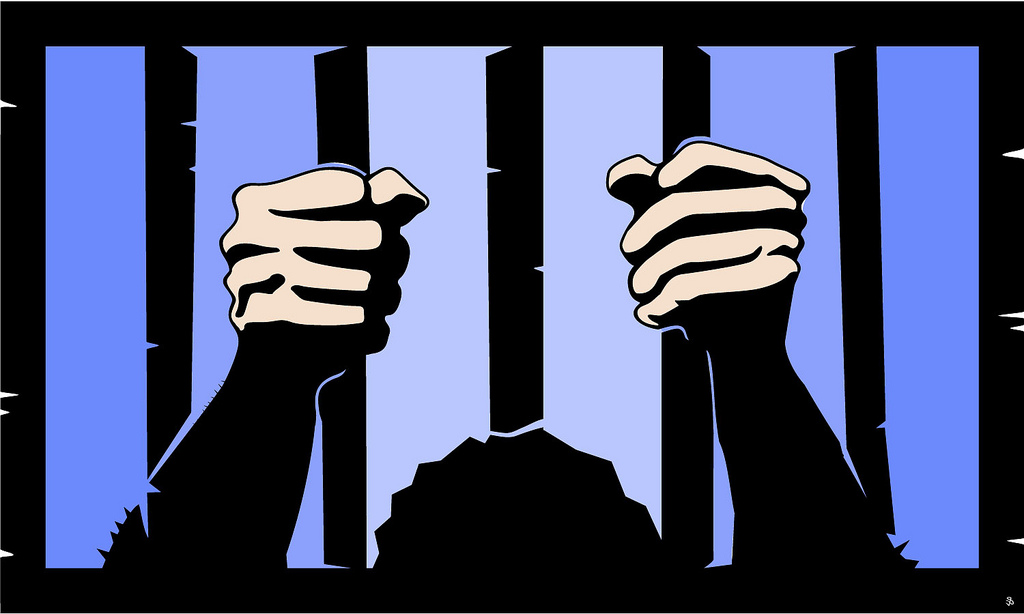 The cell is cold. I sit on the bench nearest the narrow window, trying to absorb what little warmth filters through the frosted leaden glass. Waiting.

The guard comes over and calls for one of my cellmates.

“Barber! You made bail. Let’s go.” And Barber rises from his spot in the corner, a tiny whisper of a man who until now has somehow gone unnoticed by the other three.

I don’t know the identities of the others, so I’ve given them names: Smoke Machine, Laughing Man, and The Biter. Smoke Machine paces from one end of the cell to the other holding his left hand in his pocket and waving the right about with two fingers pointed as if he’s smoking a cigarette or giving a lecture. Now and then, he brings the fingers to his pursed lips as if taking a drag. He’s not a nervous pacer. He’s scheming. I wonder what his deal is.

Laughing Man isn’t a cackler, thank god. He more or less chortles. At everything. When Goliath left with his lawyer earlier in the morning, Laughing Man was smiling a dull, benign smile that Goliath took personally. For a brief, tense moment as he made his way to the cell door, Goliath – all 350 pounds of him – stood nose to nose with Laughing Man and said, “What’s so funny?”

Laughing Man didn’t flinch, which surprised me because I did, but rather stood chortling under his breath. The effect was both humorous and disturbing because I could see the slow burble of manic magma rising in his eyes as he looked at Goliath. I wonder if the fat man knew how close he was to death at that moment.

And then there’s The Biter. He stands, rooted by the wall near the door with his back to us, mouth open, biting the horizontal bar in front of him. He’s been in that position for the last five hours, unmoving, willing his jaw to grind through the bar. I count. Even if he was able to bite through it, there were still seven more to get through before he could escape. At this rate, it’ll take him a day and half. But I don’t think that’s his plan.

I wonder if I will ever stop naming people as if they were my arch rivals. Those days are over now. Not everyone in a prison cell is The Bad Guy.

During lunch time, Smoke Machine gets to make his call. He’s standing in the hallway outside the cell at the pay phone about 15 feet from where I’m sitting. I can clearly hear his side of the conversation. He paces as he talks, still smoking.

“I’m fine. No, there are couple of others in the cell, too. Don’t worry about me, I said I was fine. Listen, I need you to do me a favor. Take the kids to Aunt Marcy’s house. Their bags are under the bed in the guest room. Great. It’s just for tonight, I think. I really appreciate your help, Darlene. Sure. How soon can you get here?”

I laugh out loud and briefly attract the attention of the others. I turn toward the window pretending to see something beyond and they ignore me again.

Almost exactly 24 hours ago, I was asked – once again – that same question. How soon can you get here? They were spoken, as usual, with not only a sense of urgency, but of expectation – as if I didn’t have anything else going on. For years now I’ve heard the words beneath the words: Drop everything. The situation is dire. What you’re doing right now isn’t important. Your life doesn’t matter as much as the ones you need to save.

And I know that they are just reading from the script that life has given them, just as I have my lines. But there are just so many times you can say You’re safe – nothing can hurt you now or Who put you up to this? or You won’t get away this time with honest conviction.

I used to love that stuff! I don’t know when I lost the thrill of the chase, the joy of capturing the bad guy. Until recently, I haven’t been conscious of having left the path, but looking back now, I can see the transformation from “Not again,” to “God damn it. I just sat down with the paper,” to last night’s, “To hell with it, let ‘em die.”

What no one will ever understand though is the freedom that that thought has given me. My entire life, I have fought for people’s freedoms while denying my own. I am just a guy in a cape, pushing his boulder up a hill every day – and it’s not even my boulder. I have risked my own life countless times to save the lives of others I don’t even know. I don’t get postcards at Christmas, or letters from kids saying, “Thanks for saving my Mommy.” As selfish as it sounds, I don’t ever get anything in return.

When I got the call last night about the hostage situation at the East Side Mall, something changed in me. I let the boulder go. The Chief asked, “How soon can you get here?” And I told the Chief that I wouldn’t be coming. He was incredulous. “Why?”

“Because I need the night off,” I told him. “Because, I quit. Because… the people who went to that mall, were there because they were free to make their own decisions, their own plans. And as much as I hate to admit it, so are those assholes with the guns. The flipside to freedom is consequence. And I am tired of being the arbiter of consequence.”

When I had hung up the phone, I felt a crisp sting of guilt which was immediately washed away by a sense of delightful emancipation. I unplugged the phone and went for a walk in the cool night air.

Early this morning, I was awakened by the sound of my door buzzer. As I stood there in my bathrobe and slippers, two sheepish officers – more accustomed to seeing me in costume – served me with a warrant for my arrest. I could have cracked their skulls, disarmed them with a blur of movement. On the way to the squad car, I could have broken the cuffs and flown away, but I didn’t. I knew that I would accept the consequences of my freedom even if it meant losing my freedom as a consequence.